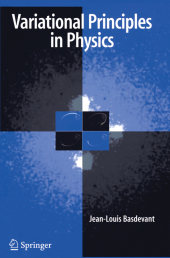 "This book is based on a course given by Professor Basdevant at the Ecole Polytechnique, near Paris. ... it would be an excellent basis for a course, provided one has the right collection of undergraduates. The book could also be used at a more advanced level in many ways ... . For anyone with radical tendencies in this direction, Basdevant´s book will provide an elegant launching point." (L. S. Schulman, SIAM Review, Vol. 49 (4), 2007)

"It invites the reader onto the vessel ´variational principles´ to embark on a journey through a variety of different areas and regions of physics. ... In general ... independent of individual preferences, Basdevant´s book provides a well-balanced overview of various old and new areas of theoretical physics based on an approach by variational principles. Not only will students profit from this book, but also more advanced readers might get captivated by it." (H. Hogreve, Mathematical Reviews, Issue 2009 f)
A graduate of the Ecole Normale Superieure, Jean-Louis Basdevant is Professor and Chair of the Department of Physics at the Ecole Polytechnique, and Director of Research for the CNRS. Specializing in the theoretical physics of elementary particles, quantum field theory and astrophysics, Prof. Basdevant works in the Leprince-Ringuet Laboratory at the Ecole Polytechnique.