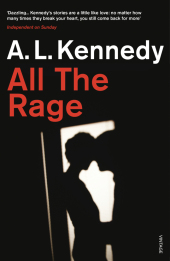 A dozen stories: a dozen ways of looking at love, or the lack of love. Over five previous collections, A. L. Kennedy has shown herself to be a master of the short form, with a perfect way with sentences and a voice so distinct as to be instantly recognisable.The dazzling new collection from the Costa Prize-winning author of Day and The Blue Book.

She doesn´t ever lie to him unless it´s for the best.

A husband and wife wait for a train as their relationship unspools silently around them. A woman contemplates the idea of her lover dying as she queues in a bank. An almost impossibly uncomfortably lunch culminates in a passionate kiss. In this dazzling collection of stories lies the battlefield of the heart, where characters who have suffered somehow emerge - haltingly, awkwardly - into the astonishment of intimacy."One of the most consistently dazzling writers of her generation... Kennedy´s stories are a little like love: no matter how many times they break your heart, you still come back for more. This collection proves, once again, that it is always worth it." Katy Guest Independent on SundayA. L. Kennedy has twice been selected as one of Granta´s Best of Young British Novelists and has won a host of other awards - including the Costa Book of the Year for her novel Day. She lives in Essex.